Of the many amazing sights and sounds of this years Silverstone Classic which was held over the weekend of 28-30th July, one that sticks in my mind the most is the closing race of Saturday. The provocative Group C race cars took to the track with twilight descending and the rain pouring down to assault our senses.

These majestic motors are the epitome of what the classic is all about and show the exotic beauty and prowess of the extraordinary cars and the expertise of their drivers. The sound reverberates off the stands as these mind-blowing motor cars use every ounce of their power to speed around the 3.6393-mile track at exceptional speed. With the soundtrack of the bands playing on the main stage mixing in with the deafening roar of the 40-year-old engines, the sound was a grandiose cacophony of dynamic proportions. 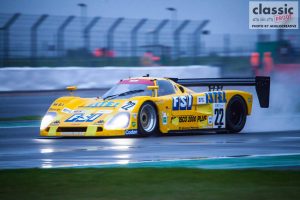 Considering that dusk was drawing in around us and the heavens opened during the race you would be forgiven for thinking that the Group C cars wouldn’t draw much of a crowd, however, you would be wrong! These enticing beauties drew an impressive multitude of cheering spectators in the stands and dotted along the track watching through the fences as the majestic motors managed to grip the wet ground until unfortunately the deluge started to affect the tyre control and a pit stop was necessary to change to wet weather rubber due to the extent of the precipitation on the ground.

This breathtaking race as the sun went down and the night began to envelop us was spectacular, to say the least. The lights danced off the tarmac making it glisten in the rain, giving off a magical feel to the proceedings and the exciting wheel to wheel wizardry of the cars and drivers putting on a spectacular show. This first amazing race was deservedly won by Steve Tandy in the Spice SE90 GTP with a race time of 1:54.980 and reaching a top speed of 113.95 MPH. However, in the second race driver Kriton Lendoudis in the ex-Michael Schumacher Silver Arrows Mercedes C11 took pole position with a time of 32:20.690 and a max speed of 100.39 MPH, Tandy pulling in second with a time of 32:39.731.

If you are after excitement and thrills aplenty you would be hard pressed to find a better race than Group C.

Check out the other great shots from this race in the series below.