Historic Motor sports; to us at Classic Proof it just doesn’t get any better. September is just about the busiest month of the calendar year, with races nearly every weekend. Throughout Europe the roaring engines of historic race cars reverberate across some of the most iconic racetracks. In this story, the first of a series, we’ll try to give you some insight in the workings of these classic race car series. We’ll start things off with historic Formula 1 cars up until 1966.

F1 cars up until 1966 are united in the Historic Grand Prix Car Association, and the racing line-up depends on the number of cars on the starting grid. There are no less than 12 categories racing under the HGPCA moniker with cars dating back all the way to the 1920’s. Usually categories are split into two races: one for front engined, and another for rear engined cars. But even then there are times when all categories are combined to form a decent sized starting grid. This for instance was the case at both the Zandvoort Historic Grand Prix and the Spa 6 hours support races this year. The reason for this should be abundantly clear: Although the mechanics on these cars are relatively simple, the number of parts available for these cars is notoriously limited and racing several weekends in a row can be quite a challenge.

One of one
Ian Nuthall is a regular contenders in the Pre 1961 category. His company INracing does maintenance and race-prep on several vintage F1 cars. Ian gave us a little insight into the problems you can run into with these early cars. “One thing you should understand is that some of these cars racing today are totally unique. There’s several cars on the grid that are one of only one built. The Alta F2 I drive, is the only one that was ever made, and there are so many custom parts on it. On this car one of the particular problems was with the wheels. There are no blueprints of how they where made, and when we first got the car we even had to figure out how they went together. We had to machine new ones from scratch. Over the last few years we’ve even started recasting engines, just to be able to run these cars. The originals are kept safely in storage, and the engine and gearbox we use on track are accurate copies. It’s the only way you can race these cars, because there simply aren’t any spares. There never where.” 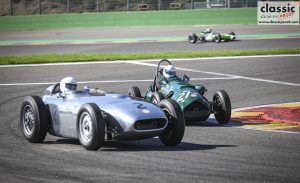 Ian Nuthall in the Alta on the left

George Fowles is another veteran race mechanic in the paddock. Amongst the cars he takes care of Tony Smith’s stunning 1958 Ferrari 246 Dino. He gives us some insight in the huge costs to run these cars. “This particular car has a very fragile gearbox. We have two for the car, one with a higher gearing ratio and one with a lower ratio. These boxes are very complex and contain a high number of moving parts. On average they last about two race weekends, and rebuilding one can cost up to 25.000 pounds, depending on the amount of parts that need replacing.” 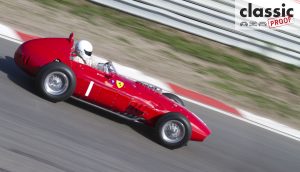 Being Part
Needless to say, you need very deep pockets to be able to run a vintage F1 car for an entire season. Strangely enough, not even all race car owners drive their own car. Ian Nuthall’s son William regularly takes controll of some of the cars placed in INracing’s care. “We have clients that love the idea of owning a racecar, and putting a racecar on the track. But they’re neither capable or willing to drive one. Sometimes they can’t make a race due to conflicting schedules, and sometimes they’re not even qualified to race. So we race the car for them. It’s more the idea of being part of the racing world that counts for them.”

Of course it’s the public that benefits the most from these high rolling investors, as the HGPCA is the only chance to really see vintage race cars compete on a track. And whether it’s Fangio’s Maserati 250F, or Graham Hill’s and Sterling Moss’s Lotus Climax; the racetrack remains the only place where you can see these cars do what they where made for. The distinctive sound of these vintage engines, the back end breaking away in the corner, the smell of petrol and burning oil. These are all things that simply don’t come across in a museum.

There’s two more chances to watch the cars of the HGPCA on track this season. From 20 to 22nd of October at the Estoril track and from 27 to 29th of October at Portimao, both in Portugal.

Check out the full gallery of Pre 66 F1 cars below.