We’re suckers for a good cause and when Imogen Paton shared her story with us we couldn’t resist passing it on to you. Imogen has been a victim of domestic abuse and is now raising money to restore a 1968 Chevrolet Impala. Once restored, the car will be used to raise money for Solace Women’s Aid, an organisation focussing on helping abused women get their lives back on track. The car itself played a vital part in Imogens story and as such it is only fitting that the Impala is to be restored.

Imogen, an artist and mother of three had been coerced by her former partner to sell her family home in order to invest the money in a business venture that involved renting out classic cars. The Impala was part of that busines venture, but was crashed by the ex-partner about two weeks before Imogen finally got up the nerve to leave him. The Solace Women’s Aid has been instrumental in helping Imogen set up her life again and in return Imogen has been using the Impala as an ‘Art Car’ on events to raise awareness for domestic violence.

The plan is to now completely overhaul the Impala with the first priority being to repair all the bodywork. Phase two will focus on paint and upholstery. Imogen is trying to raise £10.000 pounds to get the restauration underway. If you’re interested in helping Imogen out, or if you want to read her full and gripping story, you can check out her campaign on GoFundMe: www.gofundme.com/badkarmaimpala 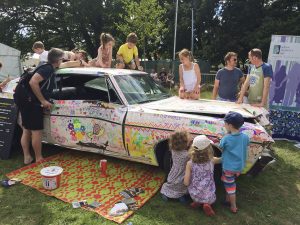 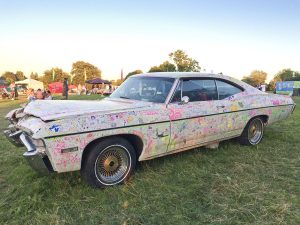