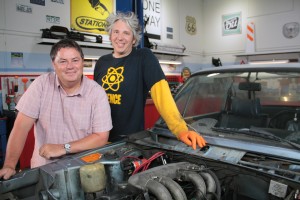 Wheeler Dealers season 13 is about to kick off in the UK and Discovery has just revealed the cars Mike Brewer and Edd China are getting their hands on. This being the second season filmed in the US the duo have returned with eight more classic cars featuring a mix of British, European and American marques.

Mike and Edd may have set up their workshop in sunny California, but their love of classics remains universal. Mike navigates the surrounding states in search of cars with money-making potential, bringing them back to Edd for him to work his mechanical magic to restore the cars into profit making machines.

In the new series, the boys get eco-friendly with the original ‘Econobox’, a 1977 Honda CVCC; rescue a neglected and extremely rusty 1965 Land Rover Series 2a; transform the definitive military grade vehicle, the Humvee, into the ultimate camping accessory; and put the zip back into the performance of an 80s icon, the 1988 Ford Mustang 5.0.

The first episode sees Mike and Edd pick a car that was the car to buy in the 1980s if money were no object – a 1987 Mercedes 560SL. The Mercedes engineers spared no expense when designing this classic. Mike finds a well looked after example but one in need of a complete refresh, mechanically and cosmetically. As the costs and work mount up will Edd be able to revitalise this 80s icon without breaking the bank?

Mike said: “After restoring over 100 cars, me and Edd are still finding fantastic classics to restore and if there was a theme for this series, it would be ‘having fun.’ With cars from the 1960s, 70s and 80s, Edd will be getting more involved in choosing the type of car we are looking for each week while I’ll be taking my turn getting my hands dirty in the workshop.”

When the repairs are complete, the duo hit the open road to test the restored ride before Mike tries to sell it for the highest profit possible. From the massive oily challenge of rebuilding an engine to fixing tiny items like a rev-counter, no one knows how to transform a rust bucket to a dream machine like the WHEELER DEALERS.

Edd adds: “We may be basking in the LA sunshine but the job in hand remains the same. Our brand spanking new workshop will see the same amount of sweat and tears as the previous ones in Bracknell; It just so happens that we now have the Pacific Coast Highway outside rather than the M25!”

Discovery Channel has kindly supplied us with an overview of the episodes and the cars of the 13th season.

EPISODE 1
1987 MERCEDES 560SL
If money were no object, then this was the car to buy in the 1980s. The Mercedes engineers spared no expense when designing this classic. Mike finds a well looked after example but one in need of a complete refresh, mechanically and cosmetically. As the costs and work mount up will Edd be able to revitalise this 80s icon without breaking the bank?

EPISODE 2
1988 FORD MUSTANG 5.0
What’s the ideal affordable muscle car for a young aspiring mechanic to cut his teeth on? Mike and Edd decide that the 80s classic, a Ford Mustang 5.0 is the ideal fit. Mike finds an unloved example that needs more than a little TLC to live up to its muscle car reputation. Edd embarks on a multitude of fixes and upgrades with the sole intention of putting the zip back into its performance. They’ll find out just how successful he was once they hit the ¼ mile strip on race night!

EPISODE 3
1977 HONDA CVCC
Edd wants the guys to tackle something eco-friendly but with personality. Mike’s surprise solution is the original ‘Econobox’, a 1977 Honda CVCC. It’s no classic beauty but its retro understated looks belie the fact that when it was released it revolutionised the car industry and kept Honda making cars at a time they were thinking of giving up the Automobile industry. Can Edd restore the looks and the amazing 50mpg fuel economy employing only eco-friendly techniques?

EPISODE 4
1965 LAND ROVER 2a
In most people’s eyes the Land Rover series 2a is ‘The’ Land Rover to own. So when Edd and Mike set themselves the challenge of finding the ultimate bug out vehicle that will keep going no matter what, there was only one contender. Mike locates a neglected and extremely rusty example but like any true Land Rover fan he believes that it’s never too late to rescue one of these beauties… whether Edd agrees is another matter.

EPISODE 5
1963 VOLVO PV544
Mike was set the challenge of finding a classic endurance sports car. On first appearances this Volvo does not look like a fits that bill but the PV544 is the ultimate wolf in sheep’s clothing. With a record breaking rally past this car has some serious heritage. Mike finds a decent running example but with an engine that very few mechanics can master will Edd be able to restore it to its former glory and deliver a decent daily driver that will also deliver them a profit?

EPISODE 6
1980 CHEVY LUV
When Edd set Mike the task of finding him a classic American truck for him to work on this was not what he expected to see back at the shop. Mike heads to Sonoma County where he meets his first hipster and her Chevy LUV. This truck is ‘loved’ but needs a lot of TLC from Edd to get it into a condition that a buyer will love. After Edd’s initial reservations he begins to see the little truck’s appeal and sets about the transformation.

EPISODE 7
HUMVEE
If you’re going to head into the real ‘outdoors’ then you need a vehicle that can cope with anything. Where best to get something like that? The American military of course! Mike visits a yard of over 300 Humvees to pick the right one for them but soon realises he may have bitten off more than he can chew. Edd comes to the rescue, helps pick the ideal example and begins work on it in the field, literally. Now all they have to do is transform a military grade vehicle into the ultimate camping accessory and find a buyer!

EPISODE 8
1963 CORVAIR
Mike and Edd decide to create an eye catching, inexpensive beach cruiser, something that won’t break the bank but will turn heads and put a smile on the face of the lucky owner. Despite a poor reputation for safety when it was released Mike decides to go for the Chevy Corvair. He finds what looks like a wreck of a car in a towing yard, but it does have a running engine. Can the guys restore this forgotten classic to its original beauty, address all safety concerns and find a buyer to cover their costs?

Check out the brand new Wheeler Dealer trailers on our Youtube channel: